Travelling on the BuddhistRoad: Research Associate receives Professorship in Tibetology 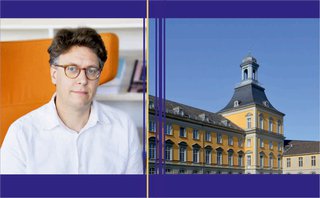 The CERES team warmly congratulates Lewis Doney, who started his post as Professor of Tibetology at the Rheinische Friedrich-Wilhelms-Universität Bonn on the 1st of October, 2021. Until receiving the professorship, Doney had been working as a research associate within the BuddhistRoad project.

In his new academic position, Doney focuses not only on teaching Tibetan language and culture but also on researching Tibetan history within the context of the cross-border relations that Tibetans have maintained with other lands in South, Central, East and Southeast Asia over more than a millennium. He also examines the resultant dynamics of asymmetrical dependency that these transregional contacts have created and how such stresses are exacerbated by more recent challenges caused by climate change and some effects of modernisation both across the Tibetan plateau and in the borderlands of the Tibetan cultural zone.

Despite his move to Bonn, Lewis Doney continues to cooperate with the BuddhistRoad project. Together with Carmen Meinert, Yukiyo Kasai, and Henrik H. Sørensen he will be editing the third conference proceedings of the BuddhistRoad project, entitled "Buddhism in Central Asia III: Doctrine, Exchanges with Non-Buddhist Traditions" (open access publication planned for 2022/23).