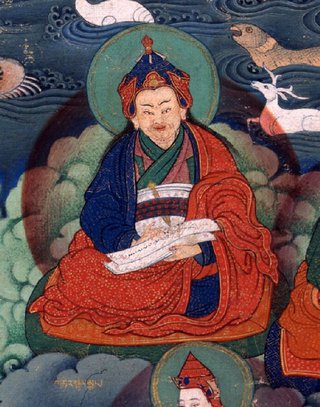 An international research team led by Prof. Dr. Carmen Meinert (CERES) analyses Tibetian sources of the 12th century in order to reconstruct the formation of Buddhism in the Central Asian region of Tibet. To conduct the research she recently received a 2 years grant by the Deutsche Forschunggemeinschaft (German ResearchFoundation).

The research project Nyang ral's codification of rNying ma literature and ritual. A study of Tibetan sources for the formation of Tibetan Buddhism (10th to 12th c.) explores the creformulation of Buddhists beliefs and practices in the 12th century which had come to Tibet froim India four hundred years earlier. This tradition, also known as Nyingma (rNying ma) tradition or "Old School", adapted the Indian tantrism to Tibetian narratives and culture. It established a written canon, to which new additions were repeatedly made through revelation and inspired redicovery.

Among the most notable legacies of Nyingma to the rest of Tibetan Buddhism were its system of hereditary religious authority, still widespread across Tibetan Buddhism, and its major deity Dorje Phurpa (rdo rje phur pa), still practised by most other traditions. What made the 12th century reformulation of Nyingma so unique was its dependence on the activities of one extraordinary person: Nyang ral Nyi ma'i 'od zer (1124-1192). In his 13 volume magnum opus Kagye Deshek Dupa (bKa' brgyad bde gshegs 'dus pa), he codified Nyingma tantrism in a template still followed today. In addition, he wrote history and hagiography, cementing the Nyingma narrative traditions. Only after him and his Kabje Deshek Dupa can one talk of a full-fledged Nyingma tradition.

Although utterly seminal, Kagye Deshek Dupa remains unstudied by modern scholarship. The research project threefore intends to begin to remedy the situation. Since the collection, however, is too big for a single project, the team will focus on one section only: its 250 pages on Dorje Phurpa, the major Nyingma deity.

This choice is also guided by the team's previous study of most other sources for early Dorje Phurpa. Most importantly, recently text were discovered amongst archaeologically
recovered 10th century scriptures from Dunhuang, the undoubted source material which Nyang ral used as a foundation for his key section of his Dorje Phurpa codification.

In brief the research project under the direction of Prof. Carmen Meinert, scheduled from October 2017 –September 2019, is geared towards the philological, historical, sociological, ideological, and doctrinal understanding of Nyang ral's reconstruction of Dorje Phurpa out of earlier dated materials, and the repercussions of his legacy for later generations of Tibetans. Two former KHK research fellows will be engaged within the project.