KHK in the Final: Last Conference of the Research Project held online 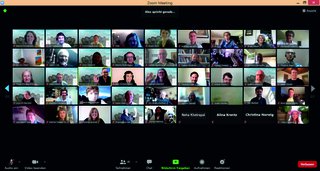 After over twelve years of research, more than 150 invited international research fellows and over 200 events that were organised, the work at Bochum’s Käte Hamburger Kolleg Dynamics in the History of Religions between Asia and Europe is finally coming to an end. An important keystone is the final international conference “Twelve Years of Studying Religious Contacts at the KHK: Stepping Back and Looking Ahead” that is held online from July 16th to July 18th, 2021.

The conference had originally been planned to take place in Bochum at the beginning of March 2020. However, due to the rising pandemic at this time the event was postponed in order to ensure the safety of all participants. There was hope that it might be possible to held the conference together with our international fellows in person in Bochum at later point in time. But given the ongoing pandemic situation, the directorate decided to design the final conference purely as a virtual event.

The online event is joined by attendees from the USA, Switzerland, the United Kingdom, the Netherlands, Denmark, Israel, Canada, and Germany. For three days they discuss the research work of the Kolleg and its importance for the global research of religious contacts and the transformation of religious traditions. Furthermore, some central questions are subject of discussion, e. g. the directions religious research may take in the years to come. Within the conference participants are encouraged to step back and reflect on a more distant perspective on the major lines in the current research of religions to be found worldwide. What theories and methods will be relevant in the future? What promising approaches in research can already be spotted? How are they consistent with the objects of research?

During the next months, the Käte Hamburger Kolleg will mainly focus on transfer projects for different target groups, to make its research work public beyond the academic boarders. “Everything in this world ends, even the Käte Hamburger Kolleg ‘Dynamics in the History of Religions between Asia and Europe’ — but something new is emerging, too”, says the founding director of the research institution, Professor Volkhard Krech.