RUB » CERES » Person
de
PD Dr. Levent Tezcan is no longer a member of CERES. The information given on this page may therefore be outdated. 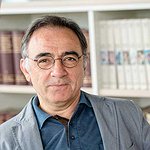 Project: Institutionalization of Islam in Germany