RUB » CERES » Person
de
Dr. Eduard Iricinschi is no longer a member of CERES. The information given on this page may therefore be outdated. 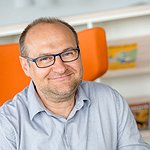 Eduard Iricinschi specializes in early Christian heresiological literature, Manichaeism, the Nag Hammadi literature in late-antique Egypt, the history of ancient Christianity, and methods and theories in the study of religion. He earned his Ph.D. in religion from Princeton University, New Jersey, in 2009, under the direction of Elaine Pagels, with a dissertation on “The Scribes and Readers of Nag Hammadi Codex II: Book Production and Monastic Paideia in Fourth-Century Egypt.” Eduard Iricinschi is the co-editor (with Holger Zellentin) of the volume Heresy and Identity in Late Antiquity (Tübingen, 2008); he also co-edited (with Lance Jennot, Nicola Denzey Lewis, and Philippa Townsend) the volume Beyond the Gnostic Gospels: Studies Building on the Work of Elaine Pagels (2013).