The Sogdians and the Buddhism - Japanese Researcher presents his Findings 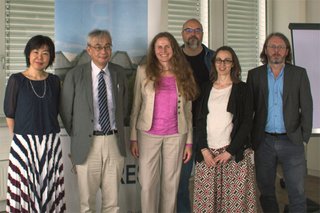 Japanese researcher Yutaka Yoshida is one of the few international experts of Sogdian and currently visiting the Center for Religious Studies (CERES). Invited by the ERC funded project BuddhistRoad, Yoshida, who holds a Chair at the Kyoto University, presented his research findings in a guest lecture.

Sogdians formed an ancient Iranian civilization in Central Asia in what is now the states of Tajikistan and Uzbekistan. Their language, the Sogdian, is part of the Eastern Iranian language branch and served for a long time as lingua franca of the Silk Road system. Though this language has not survived the cultural changes in this region during the centuries, several written sources have remained and draw a vivid picture of commerce, trade and religious exchange in this area. Sogdians were adherents of different religious faiths.

In his guest lecture, Yoshida introduced into the Sogdian Buddhism between the 6th to 11th centuries CE and underlined that Sogdians were the pre-modern traders of Central Asia par exellance. They converted to Buddhism after they had settled in a region that had been massivley influenced by Buddhism. Both numerous texts, of which some where found in the oasis city of Dunhuang, and archaeological findings, which lie in today's state of Kyrgyzstan, show that Tantric Buddhism was practised widely by Sogdians. Given this context, one text is especially surprising: It is a Sogdian-Christian Text in which Buddhist deity Mahākāla is used as a transliteration for Apollo. This special translation was produced in a region of present day's Kyrgyzstan, in which Tantric Buddhism, local forms of Sogdian Zoroastrianism, and Nestoranism - also known as the "Church of the East" - lived together side by side. This unique text source gives proof for the mutual interactions and entanglement of religious traditions in this region.

It is intended, to publish the presentation of Professor Yoshida as part of the Working Paper Series on the Website of BuddhistRoad.