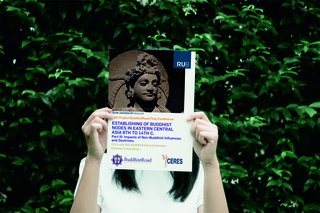 Between the 6th and 14th centuries, Buddhism on the Silk Road met not only with other religions, from both east and west, and the then predominating indigenous religious traditions but also with new non-religious practices, technologies, and ideas. These encounters formed new Buddhist traditions, in which worldviews, beliefs and creeds were organised as doctrines. These new formations stand at the centre of the final conference of the ERC funded BuddhistRoad project. The international project team will introduce into their research and discuss their findings with colleagues from around the world, 12–14 July 2021.

The Keynote talk will be given by renowned historian of Centra Asia, Prof. Dr. Michal Biran of the Hebrew University, Jerusalem. She will describe the spread of Islam across Eastern Central Asia that influenced Buddhism in the same region.

Given the worldwide COVID19-pandemic, the conference will be held online only. Nevertheless, the conference will also include scholars from the University of California at Berkeley, the British Library, from the universities of Prague, Beijing and several German cities. Their papers will address topics such as the Nestorian Christianity in China, Manichaeism on the Silk Road or religious traditions that had dominated the area before the arrival of Buddhism.

The conference will form the basis for an Open Access proceedings volume with the Brill Series “Dynamics in the History of Religions.”