On the ears: Radio interview with CERES researcher on the Buddhist Vesakh festival 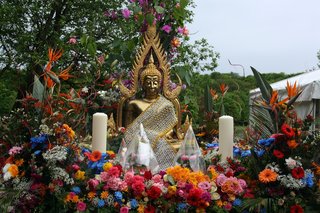 On 16 May, Buddhists around the world celebrate the Vesakh festival. The festival originates from the Theravāda tradition and celebrates the memory of the most important events in Buddha's life: his birth, enlightenment, and death (Parinirvāṇa). Nowadays, the festival is celebrated by Buddhists of all traditions and falls on the first full moon in May. Similar festivals occur in the same period in other Buddhist traditions. In Tibetan Buddhism, for example, the festival of Saga Dawa (this year on 14 June) commemorates enlightenment and the day of death, while Buddha's birth is celebrated on another day, 6 June.

Good (and also bad) deeds are said to multiply on this day, so one of the customs on Vesakh is to release captive animals. Various offerings such as flowers and fruits are also made in the temple, and people are generally careful to perform good deeds.

What exactly Vesakh is all about and why different Buddhist traditions celebrate Vesakh on different days is explained by CERES scholar Dylan Esler, among others, in an interview with Mechthild Klein from WDR and Deutschlandfunk.

You can listen to the interview here