New Tasks for the KHK 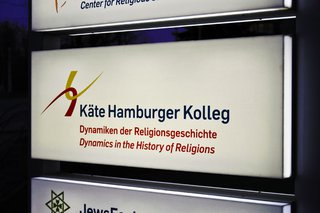 Yesterday, a new stage of work begun at the Käte Hamburger Kolleg Dynamics in the History of Religions between Asia and Europe. In the next two years, both scholarly communication and public outreach will be the central tasks to be performed. Thus, this upcoming phase will be dedicated to the transfer in many respects.

By the end of March 2020 the Kolleg completed its research phase to a large extend. The Kolleg begun its work in spring 2008 under the direction of sociologists of religion Prof Dr Volkhard Krech. Since then, more than 150 visiting research fellows from all over the world had come to Bochum to execute their own research on religious contact situations and religious transfer. During their engagements, the external researchers were thoroughly supported by scholars of Ruhr Universität Bochum from a wide range of academic disciplines such as religious studies, Classics, Protestant and Catholic theologies, Islamic studies, Japanese studies, Korean studies, Sinology, Indology, Jewish studies, history, and philosophy.

Given this, the spectre of research projects dealing with religious contact situations was extremly broad and covering many ages, numerous religious traditions, and vast regions of the Eurasian continent. It ranged from exploring the imaginations of Ancient Near Eastern dieties to discovering the multitude of alien religious impacts on the Buddhist visual language to analysing apps for mobile phones dealing with religion.

The overall aim of these individual research projects was to explore the forces behind the formation and the expansion of religions as well as the mutual permeation of religious traditions. Not without reason was the research programme focussing on Europe and Asia only: All religions, which are today widely labeled by the term 'world religion' originate in the lands between the Mediterranean Sea in the west and the Pacific Ocean in the east. Even religious traditions, which in parts do not exist anymore, came into being in these vast areas.

Overall, the academic goal of the Kolleg is to establish and test a typology of contacts of religions and an overarching theory regarding the transfer of religions. All basic research works of the last twelve years will be correlated to each other in next months in order to be refined for academic publishing, as for example in the Brill series Dynamics in the History of Religions.

Special attention is drawn to the online journal Entangled Religions: Former research fellows will keep on publishing their research findings with Entangled Religions. Additionally a selection of proceedings of the more than 200 workshops of the Kolleg will be published as well. To expand its reach, further plans include a redesign of the journal towards an innovative online publication platform. For this purpose, visual search elements and user-friendly display tools shall be integrated in the journal’s website.

Besides these scholarly communication activites the Kolleg also made first arrangements to edit research findings for a broader non-academic audience. For example, it is considered to present different historical case studies of religious contact in a public lecture series. Moreover, the Kolleg also prepares to show an exhibition of objects, possibly from collections of German missionary societies, on which religious contacts can be made visible in a material way.

The Bochum Käte Hamburger Kolleg is the only one out of ten such institutions in Germany that is explicitely dedicated to the study of religions. It is financed directly by the German government and one of the biggest research project within the humanities and social sciences of Ruhr Universität Bochum.