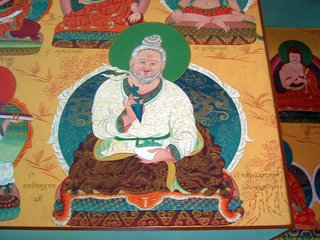 In the Middle Ages, Buddhism in Tibet faced unsettling times: During some periods it was on its height, in others it was persecuted. This is the historical background of Nubchen Sangye Yeshe, a Tibetan scholar of the 10th century who became an influential figure in Tibet’s intellectual history. He played a prominent role in the early codification of Buddhist lineages in Tibet, especially with regard to the development of the Dzogchen tradition.

A new research project at the Center for Religious Studies (CERES) is dedicated to this scholar and the Dzogchen tradition. It is led by Professor Carmen Meinert and funded by the Federal Ministry of Education and Research in the context of the funding line “Kleine Fächer – Große Potenziale”.

The project focuses on the Dzogchen doctrine, which presents itself as a path of immediate and unmediated realization of the mind’s true nature. It was to become one of the hallmarks of the Nyingma tradition of Tibetan Buddhism. Its origins, however, are not fully understood. This research project focuses on an unstudied group of Nubchen’s Dzogchen writings, which belong to the earliest indigenous Dzogchen commentaries. Because of its archaic and highly specialized terminology, this largely unexplored corpus of texts is accessible to only few experts worldwide. The texts will be analysed philologically by Dr Dylan Esler assisted by the Tibetan scholar Lopon P. Ogyan Tanzin Rinpoche.

The analysis is required both in order to render them accessible to an audience beyond the realm of Tibetologists, and in order to establish a solid foundation for context-sensitive research into the ideas articulated in this unique corpus. The hermeneutical examination of the texts’ content will concentrate on highly specialized Tibetological issues while bringing them into resonance with wider concerns in Religious Studies.