New Collaborative Research Center sees the Light of the Day 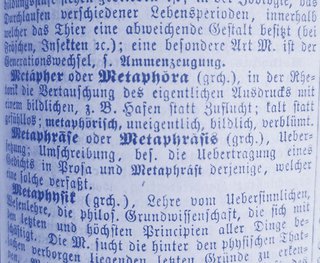 Yesterday evening the time had come: The new Collaborative Research Center "Metaphors of Religion: Religious Meaning-Making in Language Use" saw - to put it quite metaphorically - the light of day. The DFG General Assembly approved the SFB 1475, so that after the turn of the year the research work at the Center for Studies in Religious Studies (CERES) and the cooperation partners at the RUB and the Karlsruhe Institute of Technology, respectively, can start.

Religious meaning-making takes place in and through metaphors. Religion, which can never literally articulate its ultimate object - the transcendent - depends on it. The SFB wants to understand this process theoretically more precisely and to grasp it methodically in order to be able to investigate the semantic formations of religion empirically and comparatively alike. In this way, the researchers want to better understand the formation of religion as a socio-cultural phenomenon and to more precisely grasp central developments within specific religious traditions.

While there is already extensive research on individual metaphors in religious texts, the innovative aspect of this Collaborative Research Center lies in its focus on metaphoricity as a central principle of religious meaning formation. Moreover, the multidisciplinary composition of the Center enables comparative studies on a unique scale. The subprojects deal with Christianity, Islam, Judaism, Zoroastrianism, Jainism, Buddhism and Daoism with sources from Europe, the Near and Middle East as well as South, Central and East Asia. The time span ranges from 3000 B.C. to the present day. "In the first funding phase, the SFB will focus on texts," clarifies Prof. Dr. Volkhard Krech, spokesperson of the newly created research institution. "However, a working group will explore the relationship between metaphors and material objects and develop methodological approaches."

Together with another approved Collaborative Research Center on cosmic matter, the number of such institution coordinated at RUB thus rises to ten. "I heartily congratulate our successful colleagues on this achievement," said RUB Rector Prof. Dr. Martin Paul. "The Collaborative Research Centers highlight the wide range of research being carried out here at a top international level and underpin the strengths of a comprehensive university. They are also evidence of the importance of networking between researchers, both on campus and with partners beyond."