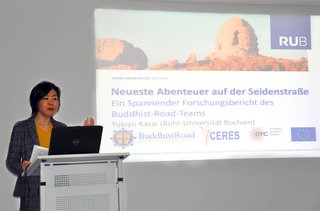 How found Buddhism its way to China? How did the ethnic diversity influenced Central Asia? And how got the the Silk Road its name?

These and further questioned where addressed by Yukiyo Kasai’s public lecture in Bochum’s BlueSquare, a university venue especially created for public outreach. In her lecture, she gave insights into the international research project BuddhistRoad for which she is working at the CERES.

Her lecture was part of a lecture series under the title “Religions from Aha to Zen” which is organized by CERES. The ancient Egyptian deity Aha and Zen mark the broad spectrum of the lecture series that comprises topics from the history of religions to the current state of religious plurality worldwide.

In the beginning of her talk, Yukiyo Kasai focused on how attractive the idea of the Silk Road is even for today’s political ambitions: The People’s Republic of China named labeled its vast infrastructure projects in Central Asia and even beyond as “New Silk Road”. One of the destinations of the “New Silk Road” system can be found even in the Ruhr Area in nearby Duisburg.

The lecture itself was dedicated to an historical approach: Central Asia as vast land between high mountains and steppes was not only trading place for all kind of material goods but also for ideas and religious worldviews. Buddhism literally arrived from its historical place of origin in India to China on the back of camels and other pack animals by the Silk Road system.

By introducing her research in the ERC financed project BuddhistRoad, Yukiyo Kasai retraced Buddhism’s way to the East. To given just a single example, the audience of about 50 listeners learned that oases had a very special meaning. They were places not only for material exchange, but intellectual hubs. It was in the trading posts in oases, where imported ideas as for example religious ones were discussed and transferred to other languages and adapted by other civilizations. Given this intelectually rich environsment, new local interpretation of Buddhism arrived - which on their part where redistributed as well.

The lecture series „Religions from Aha to Zen“ will be continued in 2020 with further public lectures on historical and present-day focused topics on religions.