Medieval Armenia as a Space of Cultural Entanglements 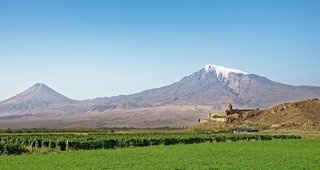 The project explores the complex medieval history of the Armenian plateau and its adjacent areas.

Between the 9th and 14th centuries, the different ethnic groups living at the Armenian plateau and in the wider area from the south of the Caucasus mountain range to Anatolia and northern Mesopotamia region were closely entangled in cultural, religious, political, and economic terms. They are considered to be largely unexplored. Headed by Professor Zaroui Pogossian of the University of Florence, Professor Alexandra Cuffel and Dr. Barbara Roggema of the Center for Religious Studies (CERES), are studying the various contacts in this region at the intersection between Asia and Europe and how they affected local cultural products as texts and material artefacts.

To this end, the Armenia Entangled project analyses not only Armenian but also Arabic, Georgian, Greek, Persian, Syriac and Turkish sources. The researchers aim at reconstructing the diverse cultural entanglements between Muslim Arabs, Christian Arabs, subjects of the Byzantine Empire, Syrian Christians, Georgians, Caucasian Albanians, a number of Turko-Muslim dynasties, Kurds, Iranians, Western Europeans, and Mongols, that inhabited, conquered, or passed through and produced cultural goods in the region.

In order to achieve this research goal, the project spans from area studies to various disciplines such as philology, literature, history of religions, art history, numismatics, and archaeology.

The ERC Consolidator Grant amounts to 2 million Euros in total.