Jewish Culture at the Spot: Excursion to Berlin 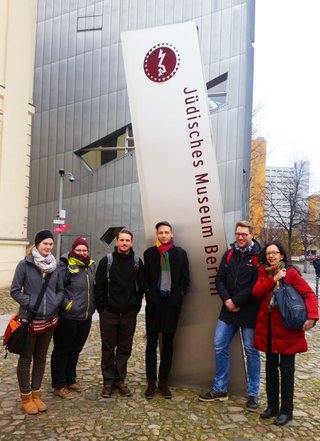 November is a rainy, grey and cloudy month – so it is more than ideal to attend an excursion and thus escaping the daily routine. On the past weekend six students from CERES study programme in Religious Studies went to Berlin. They visited the Jewish Museum Berlin, Berlin-Weißensee cemetery and the Synagogue in the Oranienburgerstraße for conducting research about material Jewish culture.

The excursion was led by Malin Drees and Judith Stander-Dulisch, two scientific associates from the CERES teaching department. The goal was to enable students to apply their already acquired knowledge locally and to collect new impressions of the diverse Jewish life in the capital.

For preparing themselves, the students learned about the different concepts of materiality in Religious Studies in the line of what has been phrased as „material turn“. In a second step, they reasoned about the specific application of those theories for Jewish studies. While on the excursion two places were focused on more precisely, at which material Jewish culture can be found in different dimensions: on the one hand the Jewish cemetery in Berlin-Weißensee and on the other the current permanent exhibition of the Jewish Museum.

At the centre of investigation was the question, which role is played by materiality in the context of religion. On the basis of the exhibits in the Jewish Museum Berlin it was considered, how the inclusion of materiality into the research of religions can be supported further. The students not only analysed the permanent exhibition by the aid of prepared questionnaire on a content related level. They also focused on the dimension of reception. Furthermore, at the visit of the Jewish cemetery the relation between funeral culture, materiality and religiosity played a huge role.