From Buddha Images to Prayer Apps: International Workshop on Religion and Media 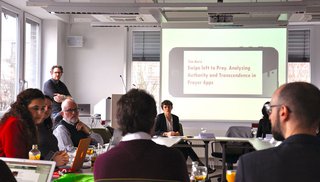 When it comes to media and religion, quite often the view is directed either towards televangelists, the presentation of religious groups in print and TV programmes or even the ways of how religious actors use, e. g. Salafis in the social media. This admittedly rather narrowed focus on recent media, however, shall be widened with the international workshop „Religion, Media, and Materiality: Interdisciplinary Perspectives on Religious Authority“. It takes place in the Käte Hamburger Kolleg with renowned academics from all over the world.

The organisers Jessie Pons, Junior Professor at CERES, and Giulia Evolvi, post-doc at the Käte Hamburger Kolleg, draw upon a wide conceptualizing of media that include among others artifacts, images, books, TV, the Internet as well as embodied practices, multi-sensory experiences and sacral spaces. In particular, the workshop assumes a material approach to investigate the following topics: Religion authorizing media, media authorizing religion, mediated representations of religion.

Religious practice necessarily involves the use of media to bridge the gap between immanence and transcendence. Scholarship has been increasingly interested in the relationship between religion and media on the one side and how material and immaterial objects become entangled in religious belief-systems and practices on the other. This workshop brings both often separated approaches together. In this respect, the issue of authority emerges as paramount.

During the workshop, three internationally renowned scholars present keynote speeches. As a start, cultural anthropologist Birgit Meyer (Universität Utrecht) talks about the issue of materiality in religious plural constellations. Moreover, Robert DeCaroli (George Mason University, Virginia/USA) will focus on the iconographic orgins of Buddha images in South Asia, while on the third day, Stewart Hoover (University of Colorado, Boulder) delivers a keynote speech. As Professor of both media studies and religious studies, he is one of the internationally renowned academic key figures that conducted fundamental research work in the field of religion and media.

But even if the concept of media is stretched far beyond its current every day use, the participants use rather young online media during the workshop as well: Find their comments and impression under #RMM18 at twitter.