The 100th Fellow of Bochum's KHK 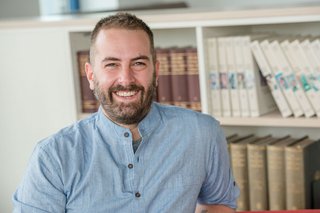 "It honours the Bochum Käte Hamburger Kolleg to be renowned and valued highly on the other side of the Atlantic. In every academic year, we have welcomed colleagues from the States that enriched our research enormously" director of the KHK, Prof. Dr. Volkhard Krech, said.

Caleb Simmons is Assitant Professor for Religious Studies with The University of Arizon and  specialised in the study of South Asian religions, specifically Hinduism, as well as in the theory and methodology in the academic study of religion. In addition to that, he is interested in contemporary transnational aspects of Hinduism, especially relating to theoretical issues within material and popular culture that arise as a result of globalization, and the exploration of ecological issues regarding sacred geography in India. During his fellowship in Bochum he  works on "Creating an Incorporeal Empire. The Process of 'Transcending' the Mysore Kingdom through Interreligious and Intercultural Interaction".