In Search of a Bizarre Multi-limb Creature. Zoroastrian and Islamic Insight into Agricultural Beliefs in the Iranian World 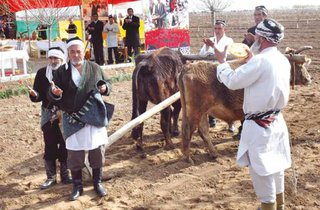 The "Mādīgān ī Yōšt ī Fryān" is a short Middle Persian Märchen-like story in prose narrating a riddle-duel between the pious youth named Yōšt ī Fryān and his malicious adversary called Axt. Among Axt’s thirty three religion-related riddles one can find a single one regarding an impressive creature with ten feet, six eyes and ears, four horns, three heads, noses, backs and pairs of testicles as well as two tails and hands. To solve the riddle, Yōšt ī Fryān obtains help from Ahura Mazdā via the messenger Nēryōsang. The explanation is a literary representation of an agricultural iconographic motif to be found on few Sasanian seals, on a Soghdian mural painting as well as in the Tajik and Turkish folklore.