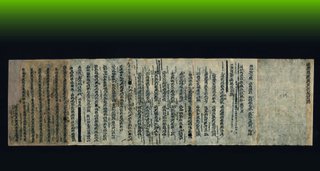 The lecture is available live at Zoom. Please pre-register here until 8 June 2021, 12 pm.

Among the many Tangut Buddhist texts discovered in Karakhoto there is one entitled sew2 ˑjij1 ˑo2 śjij1 dźju1 sji2 lju̱2 tshjịj2 -------- [The Ornament which Clarifies the Introduction to Speculative Thinking], recorded as Tang. 314 in catalogues of Tangut Buddhist texts. The work is attributed to Master Bodhi-Diligence of Central Tibet (Tang. lji2 phə1 gu2 lhjịj2 po1 tjɨj1 ˑjɨr2 dzji̱j2 --------), which attests to its Tibetan origin. The fact that several fragments of different manuscripts of this work have been identified bespeaks the popularity of this work in the Tangut Tangut Empire (ca. 1038–1227, in Chinese sources known as Xixia 西夏). This work, consisting of at least eight volumes in its Tangut translation, was presumably a long Tibetan treatise. With regard to the authorship, we are probably on relatively solid ground to argue that this work was composed by the renowned Kadam (Tib. bka’ gdams pa) master Maja Jangchup Tsöndrü (d. 1185, Tib. rMa bya Byang chub brtson ’grus). Therefore, the Tangut translation sheds important light on the Buddhist histories of the Tangut Empire and Tibet during the 12th and 13th centuries, especially on the transmission and assimilation of the early Kadam scholasticism. Remarkable features of the fragments, such as the Chinese numerals and Tibetan letters alongside the Tangut lines, reveal to some degree the practice of such scholasticism in the Tangut Empire as well.

Zhouyang Ma is currently a PhD. candidate in Inner Asian and Altaic Studies, Harvard University. His dissertation project examines the rise of Tibetan Buddhism in the Tangut Empire in the 12th and 13th centuries, focusing on the transmission of the Sangphu (Tib. gsang phu) scholasticism. He has been trained as a scholar in Tibetan Studies ever since his undergraduate education. He also became interested in Tangut Studies because the tons of Tangut manuscripts embody the gate to a fascinating world of intellectual exchanges, cultural innovations, and social plurality.