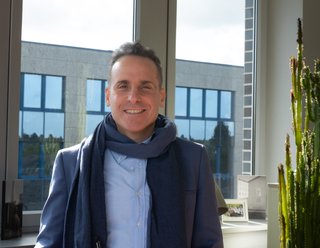 Dr. Roy Tzohar is an associate professor in the Department of East and South Asian Studies and Philosophy Department at Tel Aviv University, specializing on the history of philosophy with an emphasis on Brahmanical and Buddhist traditions. He is a guest at our CRC this week and gave a guest lecture on the works of Buddhist philosopher Aśvaghoṣa (1st-2nd c. CE).

You are a specialist in the history of Buddhist and Brahmanical philosophy. How did you come to this research area?

Tzohar: Well, in Tel Aviv University, it was rather unique – one could take Indian philosophy within a Philosophy Department. So my initial training was interdisciplinary, but with an emphasis on philosophy. And this is where I first encountered Indian philosophy, and I was captivated by the kind of conceptual and intellectual possibilities presented by it. I later pursued the topic in the United States, I did a PhD in the Religion Department at Columbia University, and then I returned to Tel Aviv later on.

Your guest lecture was about Aśvaghoṣa, a Buddhist poet from the 1st-2nd century CE, approximately. What is so special about his works?

Tzohar: Well, they're great, first of all. They're marvelous pieces of Sanskrit poetry, but they're important in various aspects. Aśvaghoṣa's works are the earliest Mahākāvya – high poetry or court poetry – works that we have from India in Sanskrit. And they are also very important for Buddhism. Buddhism at that time was in a transitional stage. It moved from India to Central Asia and to East Asia. And, for example, the most famous of Aśvaghoṣa works, which is the Buddhacarita – The Life of the Buddha – provides a life story, actually a biography of the Buddha, which is very cohesive, and influenced the way that the Buddha's life was depicted and told in the centuries to come. Even today, the story that we know about the Buddha's life actually originates from Aśvaghoṣa's rendering of that.

So, Aśvaghoṣa's works are very important for the entire Buddhist tradition?

Tzohar: Yes, and also for Indian literature and poetry. This is also the time when Sanskrit becomes a major linguistic vehicle for the production of culture and knowledge in South Asia and when Buddhism turns into Sanskrit.

Before that, Buddhism wasn't presented mostly in Sanskrit?

Tzohar: Yes. Buddhism was always a multilinguist phenomenon. It was written in different languages, Indian and others according to its geographical distribution. But Sanskrit becomes a major vehicle for the Buddhist production of knowledge. Also, importantly, Aśvaghoṣa’s works  provide us with a glimpse of how Indian thinkers and Buddhist thinkers conceived of subjectivity. The poetry is very much focused on the experience of individuals, whether it's the Buddha or his half-brother Nanda, and gives us a kind of a first perspective account of how they experience the world, the way they understand emotions, the way they understand a wide range of subjective phenomena.

As you pointed out in your guest lecture, in his work, The Beautiful Nanda, Aśvaghoṣa uses different descriptions of the forest to explain different states of solitude on the way to enlightenment. How does he use metaphors to do so?

Tzohar: Aśvaghoṣa uses metaphors in various ways. First, metaphors are a very convenient vehicle that aligns well with Sanskrit high poetry, a kind of hall of mirrors where everything is never just itself. A face is not a face, the moon is not just the moon, and so on. Everything resonates or resembles something. So that's a conventional feature of poetry. Aśvaghoṣa’s work has that, too. But going deeper, Aśvaghoṣa capitalizes on the principle of metaphorical transference, which is presenting or signifying something in terms of another conceptual or semantic domain. And he uses that to give a kind of a perspectival account of experience, that is, how different people or even the same person experience the world differently at different times according to their spiritual development. So he uses poetry and metaphors and metaphorical thinking, the very principle of that, to depict this view on experience.

Thus, he uses metaphors on a meta-level, you would say?

Tzohar: Yes, I would say that Aśvaghoṣa's work is interesting for dealing with metaphors, not just because of his ingenious use of specific metaphors to convey ideas or as content carriers, but basically by showing the way that metaphorical transference operates and what it can yield to the understanding of experience or the representation of experience. So, it presents a kind of meta-thinking on metaphors without explicitly saying that.

Thank you very much.