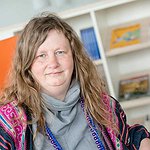 Principal Investigator von Jews and Christians in the East