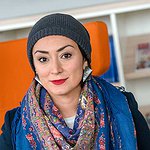 KHK Visiting Research Fellow 2016, Research Fellow within the project “Figurations of the Martyr in Near Eastern and European Literature”, Center for Literary and Cultural Research Berlin (ZfL)

Maryam Palizban earned a diploma in Performing Arts and Theatre Studies at Tehran University (2004) and was rewarded a Ph.D. at the Free University Berlin, Germany (2014). She has been a research fellow on Performing Martyrdom in ta'ziya as Shi'a Theatre-Ritual: Martyrs on the Stage within the project “Figurations of the Martyr in Near Eastern and European Literature” (2012-2014) at the Center for Literary and Cultural Research Berlin (ZfL).

Her research focuses on Persian literature and culture along with the Islamic (mainly Shiite) religion from the beginning of the Islamic conquest of Persia in the 7th c. until the Islamic Revolution, as well as war and post-war literature and culture. Her thesis text with the title Performativity of Killing: Performing martyrdom in Ta‘ziya as Shi‘a theater-ritual, explores Ta’ziya, a theatre-ritual, with a malleable religious-based content, which has been practiced among the Shiite countries, especially Iran, since the 17th c. Her work is thus best understood as interdisciplinary research in Islam and Iran’s history, Persian literature and culture, performing arts, political sciences and practical philosophy.

She is also working as an artist herself, having received various prizes in experimental and puppet theatre festivals as best director and writer and having appeared as an actress in various feature Iranian films.

Her KHK project is entitled "The Theatrical Space of Beliefs. Transcendence and Immanence in Roman-Catholic and Shi‘a-Islam: From Napoli to Rasht"

Individual Researcher of The Theatrical Space of Beliefs