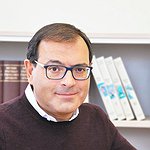 Giovanni Tarantino received B.A. in Early Modern history, M.A. in Media Studies and Communication, and in 2004 Ph.D. in Early Modern History from the University of Florence, Italy. In 2008, he was elected Hans Kohn Member of the School of Historical Studies at the Institute for Advanced Study, Princeton NJ. From 2009 – 2010, he was as Research Assistant Professor in the School of Humanities at UWA. in 2010 – 2012, he was Honorary Research Fellow of the School of Humanities the University of Western Australia. In 2012 – 2013, he was Research Associate at the Balzan Foundation (Carlo Ginzburg Project). In 2013, he has been elected as a Fellow of the Royal Historical Society. Also starting in 2013, he has been Postdoctoral Research Fellow of the ARC Centre for the History of Emotions at the University of Melbourne till 2016.

Giovanni Tarantino has been KHK Fellow from April 2010 - March 2011. During the fellowship Giovanni Tarantino did research on a project titled Sinophilia, Historical Writing, and Political Propaganda in Eighteenth-century England. This project resulted in his book Republicanism, Sinophilia and Historical Writing: Thomas Gordon (c.1691-1750) and his History of England (Brepols Publishers, 2012). Giovanni Tarantino’s main research interest is in the history of tolerance (and intolerance) towards religious minorities in the early modern era.

Duration: January 2018 - March 2018
Project: The Colours of Idolatry: Compartive Religion, Race Labelling, and Emotions in Early Modern Accounts of the 'Religious Other'

Individual Researcher of Sinophilia, Historical Writing, and Political Propaganda in Eighteenth-century England and The Colours of Idolatry