Spaces of Dignity—Spaces of Plurality: Cultural and Religious Dynamics in Contemporary Societies 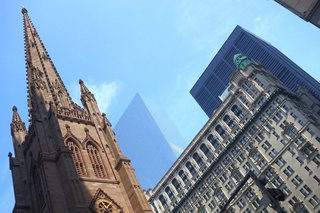 The Consulate General of the Federal Republic of Germany, the University Alliance Ruhr, and Columbia University cordially invite to the Panel Discussion. It will offer transatlantic perspectives on religious community formation in and interaction with urban space and built environments.

Cultural and religious plurality poses new challenges for dignity as a central value of modern societies. How can we create conditions that guarantee diginfied lives for all participants in pluralistic societies? Which role could and should civil, public, and religious actors and organizations play, including urban designers, ethicists, religious studies scholars and theologians? This event will offer transatlantic perspectives on religious community formation in and interaction with urban space and built environments. Speakers will address immigration and community building as well as spatial politics and its impact on the well-being of religious and non-religious communities.