Mythical and Historical Discrepancies: Chinese Princess Wencheng and the Princess of Jincheng as Presented in Old and Classical Tibetan and Chinese Sources 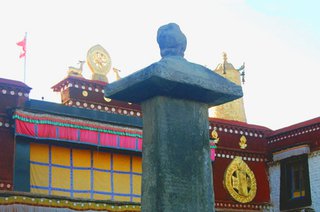 The lecture is available live at Zoom. Please pre-register here until 20 April 2021, 12 pm.

In Tibetan classical sources, the two Chinese princesses arrived in Tibet during the 7th and the 8th centuries are consistently presented as having played critical roles in introducing and promoting Buddhism in Tibet. These sources, dating as early as the 11th and the 12th centuries, provide an image of two the princesses as active patrons of Buddhism and thus perpetuate an image of two women incarnating the role of legitimisers of Buddhism’s presence in Tibet up to the present. Nevertheless, old Tibetan sources, in particular Dunhuang Tibetan documents and Chinese sources, official histories as well as other official texts, never mention the proclivity of Princess Wencheng and Princess of Jincheng towards Buddhism nor detail any specific religious activities of the two princesses. This presentation surveys references to the two princesses in early Tibetan and Chinese sources in order to go beyond this fundamental discrepancy between ancient and classical sources and to understand the continuities and divergences lying behind these texts. The goal of this presentation is also to provide the evolution of the image of Princess Wencheng and Princess of Jincheng in Tibetan and Chinese historiography.